Here you will find a short bio of the Tango Masters participating at the DC Tango Weekend. Private appointments are limited and are taken in a first come first serve basis, book now! (click here!). 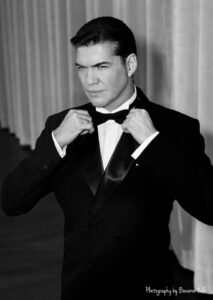 Alejandro Barrientos.
Is one of the new Argentine Tango Masters generation. He has extensive experience as a dancer, and teacher with great recognition in all tango festivals he has been working all over the world. His classes translate his experience, and has become legendary for his clear style, highly effective instruction, and for being just plain fun with dynamic and organic techniques.  He has a powerful, and sensual style created by the combination of his personality with his essence, his love and passion for the culture, music, and poetry of  Argentine tango that shines through any of his work in dance.

To see a video of Alejandro and Rosalia performing tango (Click Here!)

Junior Cervila was considered by New York newspapers “the Gene Kelly of Latin Dance”. Originally born in Brazil and based in Buenos Aires, where the tango got into his blood, has an extensive professional history that includes performances on Broadway (NY) at Gershwin theatre with “Tango Argentino”, also performed at Lincoln Center and Town Hall in New York, danced in the film “Tango” by Carlos Saura, film which was nominated for the Academy Award as Best Foreign Film.
Junior travelled the world with Julio Iglesias´Show. He filmed for the BBC with the prima ballerina of the Royal Ballet of London, Deborah Bull, and developed one of the leading roles in the successful musicals “Tanguera”, “Piazzolla Tango” and “Tangorama”. He was elected to a private tango show the Rolling Stones on tour in Argentina in 2007.

He danced with the orchestra of Daniel Barenboim in late 2006 and in Buenos Aires at Luna Park, Gran Rex, Teatro Opera, Teatro Colon and the Nueve de Julio in a historic concert of “Tango Argentino” to 15000 people.

Since 2001 Junior runs his own company “Latin Dance Company” in which fuses salsa, tango, samba and flamenco.He is considered by many as the best and most versatile dancer nowadays.

2014 to 2016- He was the choreographer of “Piazzolla Tango” and “Tango Porteño”, two of the most prominent tango shows in Buenos Aires seasons.

2017-  Performer and Choreographer of tango in Andrew Loyd Webber’s “Evita” directed by Josh Rhodes in USA.
2018 – Played The Gigolo at Grand Hotel, the musical at City Center (New York City) and part of the program Fall for Dance 2018 as a choreographer and performer.
2019 – Maestro at ATUSA, -Argentine Tango USA Official Tango Championship & Festival-, the official US branch of Tango Buenos Aires Dance World Cup.

Guadalupe Garcia started dancing when she was 5 years old with Argentine Folklore and at 12 she started with tango.
When she was 18 she got the degree of Argentinean Folklore Teacher.

Adriana Salgado and Orlando Reyes have been professional dancers and teachers of Argentine Tango for over twenty five years. With background in classical ballet, they started off studying Tango in Buenos Aires under auspices of renowned tango masters.
International performances include United Arab Emirates, Egypt, Aruba, Argentina Canada, Indonesia and their native Colombia. They are based in New York since 2007 where they have taught and performed at many tango venues nationwide. In New York City, their performances include: NY Tango Festival in 2007, “Tango Intimo”, in 2008,”Tango Connection” and “Tango Noir” in 2008 and 2009 and “Tango por Ellos”, in 2009, which received the nomination in the Latin ACE Award 2010 for Best choreography.They have been also guest teachers and performers at “Dancing at Sea”, a dance cruise company for Holland America, Norwegian and Royal Princess 2012-2013. Other stage performances were at Tango Malbec House in New York City 2012-2014. In 2018, they placed second on the competition “Pelando Variacion” held in New York City.
Their smooth, romantic, elegant style and solid connection make their Tango Salon and Stage performances outstanding. Their teaching focuses on the subtleties of the connection, posture and overall technique fundamentals. Their passion, love and constant dedication for Argentine Tango is palpable and has won them recognition with awards at home where they have been acclaimed as one of the best representative couples of Colombia and more recently in the USA, where they have become the ATUSA Stage Tango (2019) and Tango de Pista (2021) Champions

Their energetic, precise and passionate dancing style has a lot to offer. To see their performance click below:

Fabio Bonini teaching and performing tango for 20 years.  Fabio has a great method of teaching and 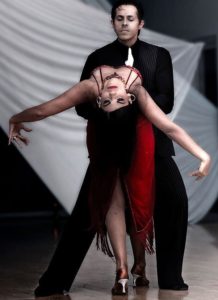 an enormous understanding of the Tango and its nuances. He breaks down this complex dance into easy and fun to learn components. He is considered one of the most versatile Argentine Tango coach in Washington, DC, metropolitan area because his unique knowledge and experience. Fabio has traveled all over the world with different dance companies teaching and performing, and nowadays is living in Virginia where he teaches regularly. He has worked with Quintango (Tango Quinted) as the main male dancer performing all over USA. Fabio teaches group classes and hosts ‘La Divina Milonga’, a monthly milonga (every 2nd Saturday) at Forever Dancing Ballroom in Falls Church. Fabio travels frequently to coach different growing Tango Communities in USA.  Click here to see Video of Fabio and partner Jennifer dancing tango. 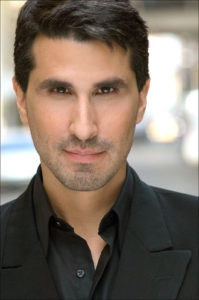 Eduardo Goytia will be DC Tango Weekend music director for the milongas and for the DC Tango Challenge. He is a well-known Tango instructor and performer based in New York City with over 20 years of teaching, performing and DJing experience. He was one of the original founders of the Pittsburgh Tangueros and helped develop the community of dancers in the Pittsburgh area before moving to NYC in 1999. While he specializes in the Tango Salon style, Eduardo’s range of knowledge is broad and he teaches across a wide array of styles including Tango Salon, Tango Nuevo and Tango for stage. He is especially known for his musicality and for understanding how differently Tango Salon, Tango Confiteria, Milonga and Vals should be danced.

Eduardo is recognized for his elegance and has appeared on some of New York finest stages including Lincoln Center, the Beacon Theater, Town Hall, Millenium Theater and the Hammerstein Ballroom as well as countless milongas and off-broadway stages. Eduardo has also appeared in several short films and documentaries and been featured on newscasts in Miami, New York, New Jersey, Pittsburgh and South Korea. In 2007 Eduardo became the US National Champion in Argentine Tango Salon with Cyrena Drusine. Together, they became one of the few American couples to ever make it to the finals of the World Championships in Buenos Aires, meeting with the US Ambassador to Argentina at the US Embassy and officially representing the USA in the championships.

While he focuses on various special projects, Eduardo is currently teaching privately and as a guest teacher throughout NYC and abroad. Eduardo can be seen dancing regularly at milongas around the city as well as performing with various dancers on stage, in shows, on television and at special events. He also regularly DJs popular local milongas and events bringing together a vast collection of traditional and non-traditional tango music gleaned and curated with the help of some of the finest DJs of Buenos Aires milongas.